On 26th April 2013, I found out that Zeptolab had released the sequel to the "Cut The Rope" franchise.
This time it's called Cut The Rope: Time Travel. See what i just did there? This time :) 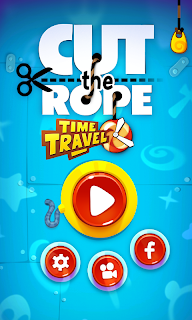 Well, maybe it was released earlier than that, but I only just noticed it that day. 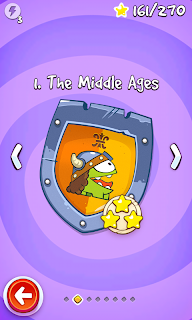 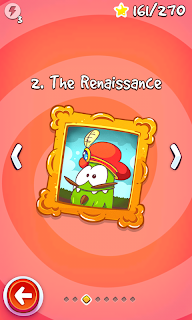 The first few episodes were quite easy to be honest.
I expect this was deliberate, to give the new players some "feel" of the game whilst giving the veteran players some polishing up. 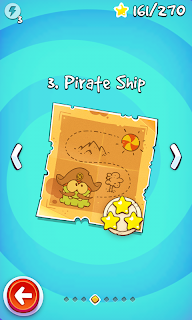 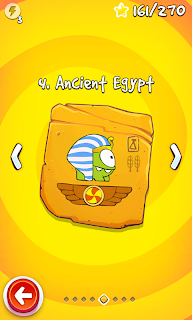 There are themes for each level.

Well, maybe the word 'theme' isn't right. Each level consists of an Era, or Age.
Like for example Level 4 is the Age of the Pharaohs!

So you get the idea. 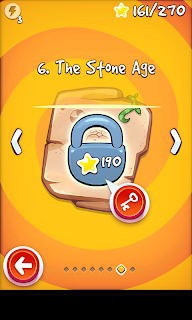 As you can see from the above, there are various levels. You have to gain a certain amount of "stars" before you can unlock the next level.
In this case, in order to unlock "The Stone Age", I'd need about 190 Stars in total! 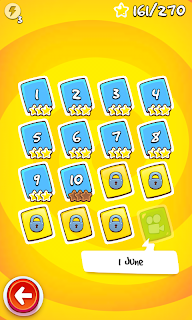 As compared to the previous games, this time Cut The Rope has 2 minor differences.

One, look at the top left corner. You can see a "lightning" with a number. This thing is actually like the Hawk or what in Angry Birds, it helps you finish the game when you're stuck.

Two, look at the bottom right with the vintage camera symbol. If you notice, there's a date.
That date shows the release date of the mini cartoon of the Cut The Rope Series.
There are lots of episodes available in Youtube for that matter.
Once the date is reached, the icon is click-able & it will take you to the YouTube page :) 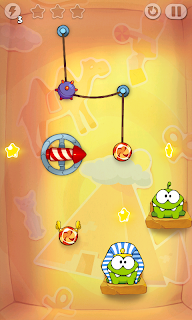 The gameplay is also somewhat different where this time around, you have to satisfy TWO OmNomNom creatures :)

It's a bit trickier this time around, but still satisfying.

You can google the APK, tons of it around.

Hope you enjoy the game as much as I did :)
Posted by Unknown