Travel Time Advisory from PLUS 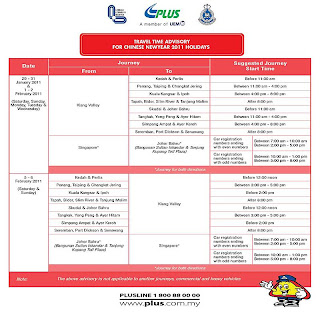 PLUS Expressways Berhad (PLUS) has issued its Travel Time Advisory (TTA) to ensure the public enjoy a safer, smoother and comfortable journey during the upcoming Chinese New Year.
According to the PLUS Managing Director, Dato’ Noorizah Hj Abdul Hamid, ”The TTA is being issued as we anticipate the traffic on the North-South Expressway during the Chinese New Year holidays will increase by 30 percent to 1.4 million vehicles per day as opposed to 1.1 million during normal days.”
She was quoted at the PLUS media briefing to highlight the company’s preparations to cope with the increase in traffic during the upcoming Chinese New Year at Persada PLUS today. Also present was the PLUS Chief Operating Officer, Tajul Azwa Bani Hashim.
According to Noorizah, the TTA is aimed at assisting the public in planning their journey for the upcoming Chinese New Year holidays.
The TTA consists of recommended staggered travel times for various destinations from the Klang Valley to major states and cities in Kedah, Perlis, Penang, Perak, Negeri Sembilan, Melaka, Johor and Singapore.
“It is aimed at distributing traffic and reducing congestion on the mainline, major toll plazas, rest areas and lay-bys during peak periods,” Noorizah said.
The TTA was introduced by PLUS in 2007 as a travel schedule based on studies of travel patterns during festive seasons over the past years. It is also a major factor that contributes to  smoother traffic on the highway during festive seasons.
For example, during the previous Hari Raya holidays, approximately 50 percent of the users followed the TTA issued by PLUS.
“As such, we urge the public to plan their journey based on the TTA as it has proven to be effective in facilitating traffic distribution thus, reducing congestion during peak periods,” Noorizah added.
During the briefing, Noorizah also highlighted other measures that will be taken and implemented by PLUS to facilitate smoother traffic flow which includes:-
”We also advice the public to plan their journey and contact our toll free PLUSLine at 1800 88 0000 or tune in to selected radio stations for the latest updates.”

It's that time of the year again where everybody is celebrating each other race's holidays
:p

This time it;s Chinese New Year, the roads gonna be jammed up, so PLUS had issued a Travel Time Advisory (TTA).

I seriously urge all Malaysians to follow this TTA, don't simply go about driving without knowing what time is the best.
PLUS had done their research obviously.
After all, we humans need rules to operate smoothly. *wink at traffic lights*
:)

Email ThisBlogThis!Share to TwitterShare to FacebookShare to Pinterest
Labels: PLUS, TTA